7 yr old Beagle, diagnosis of Epilepsy. Seizures remain problematic despite medication and the development of slight anxiety and nervousness.

Bella was a pleasure to work with and a canine companion Sharon continues to work with. Bella was prone to seizures but only on average yearly. However, her seizures increased significantly to the point of Bella developing cluster seizures, causing not only Bella but her owners some considerable distress and concern.

Bella was one of those clients where the flexibility taught in TCM and Acupressure training was called upon.

Due to either the medication Bella was on or the results of the seizures, Bella in general was unable to relax for extended periods of time and would pace until she was so tired, she would then fell into a deep sleep. During the acupressure while assessing Bella visually, Sharon could clearly see the hands-on approach to the assessment and acupressure would not be comfortable for Bella. So, after explaining to the owners about cases where small animals and canines for various reasons do not like being touched working with intent with hands off can still support and balance the required meridians and related organs.

Sharon still worked on the specific points to support Bella with her seizures and anxiety and general imbalance on an energetic level which would result from having seizures. During the acupressure session, although working hands off but focusing on the relevant acupoints, Bella was able to lay down still on the sofa with her Mum until the acupressure session was finished when Bella needed to resume her pacing for a while.

Due to the complexity and chronic nature of Bella’s condition and the impact this had on Bella’s owners, Sharon offered further support for the owners by showing them the specific areas they can massage in-between sessions to further support Bella.

Bella continues to make slow progress, but it is progress and Sharon continues to support Bella and her family, along with the input from Bella’s Veterinary surgeon. 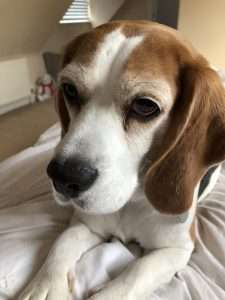