A Little History
Traditional Chinese Medicine focus on health first and when illness occurs then it meant the animal/ individual the animal is not coping in their environment. Illnesses arise due to a breakdown within the immune  system. Many external environmental triggers can invade the body when the body’s natural defences are low. Also the immune system can be affected by internal stresses such as grief or anger. (A. Snow & N. Zidonis )

Hundreds of years ago, the Chinese relied on the bare- foot doctors who travelled from village to village, receiving housing, food and payment ONLY when the villages & livestock and other animals were well. So if he failed then he didn’t get paid. This lead to the Chinese realising that the greater wisdom was to sustain health rather than wait until an individual or animal falls ill due to the weakened immune system. To understand how the living body maintains health? TCM from this understanding applied their goal of helping the body adapt to the constant environmental and internal changes and stressors (A. snow & N. Zidonis)

Tui  Na massage has its origins in ancient China and is believed to be one of the oldest forms of bodywork going. Being one of the branches of Traditional Chinese Medicine, Tui Na shares the same principles in assessment and session plans as Acupuncture and Acupressure. Through it’s application Tui Na aids in stimulating the body’s vital life force (referred to as Chi / Qi) to remove any blockages or imbalances which if left can over time lead to secondary physiological symptoms such as pain, illnesses or reduction in organ functions.

Tui Na can be just as effective when used on its own,  but it can also be combined with Acupressure when specific point work is identified during the assessment as being required. Combined with AcuPoints further reinforces resolving any imbalances be they deficient or excessive as well as restoring any imbalances if they have reached the deeper levels affecting any organ function. 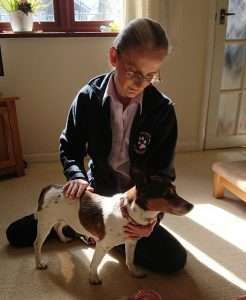 Just like Acupressure, Tui Na also does not just look at the presenting symptoms, but takes a holistic assessment which would include diet, lifestyle, history of onset of symptoms and patterns of the symptoms especially if certain times of the day / night or even the time of the year / seasons which increases or decreases symptoms (as can often be the case with allergies and arthritic symptoms). The animal’s emotional & psychological traits can also offer a great deal of information when carrying out the full holistic assessment as imbalances can influence these significantly.

See The London Underground analogy at the bottom of the the acupressure page to help visualise the Traditional Chinese Medicine’s principles of meridians and AcuPoints.